I am married to an AI superstar!! 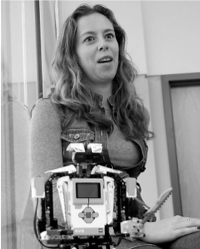 When in 2001 I moved from Italy to the US to study for my PhD in AI, I did not really know what life had in store for me. Little did I know; I was not only going to find a PhD and a career in AI but also marry an AI superstar.

Heather Ames (now Versace…), my co-founder in Neurala and ‘in life’ (4 children are more work than a startup, I can guarantee you that), was just awarded Entrepreneur of the Year 2019 New England. We at Neurala, and myself personally, are very fortunate to have her in our life.

Here’s the story of why this is the case.

When stars are born, there are few key ingredients present to make that happen: huge gravity compresses atoms in hot gases – mostly made of hydrogen – and when conditions are just right, nuclear fusion begins, and the stars stays in ‘equilibrium’, where the nuclear explosions in its interior are balanced by gravity, which pulls matter together. Our sun works like that.

Startups are pretty much born and maintained the same way. Our ‘gravity’ was the Department of Cognitive and Neural Systems at Boston University, a unique place in space and time that attracted and compressed in a unique building curious and often brilliant minds from all over the world. The goal: crack how the brain works and simulate it on computers. Three of us, Heather, from Iowa, Anatoli, from Russia, and Max, from Italy, ended up colliding during our PhD, and igniting into a company, Neurala.

While all of us were pretty much doing similar things (writing equations that describe how neurons work and make behavior possible, and writing programs to make them run on computers), we had a slightly different set of skills.

Max (that’s me) provided the WHY we should build the company, in other words the raw motivation to do it, without much details though…. And Anatoli brought clarity about the WHAT (in detail…) we should do, being a computer scientist. But the star did not ignite until Heather came in and gave us the HOW we should do it. 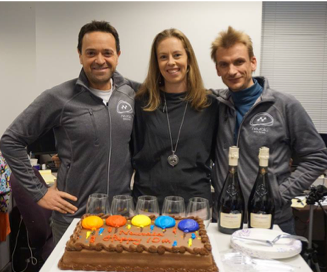 The HOW is no small feat. As skies are littered by trillions of stars that were never born, the right conditions never met, there are many startups that never made it past the initial stages. Others were briefly around, but never figured out that key component: turning a dream into a self-sustaining reality.

This is what Heather did for Neurala. She took me and Anatoli (two little kids happy to play neuroscientists) by hand, driving us out of the messy waters of pure ideas and dreams and into reality.

Once I have heard Robert Herjavec (a Shark Tank VC) saying “A goal without a timeline is just a dream”. That is very true, and Neurala would have stayed a dream without Heather and her HOW.

And the HOW is not a sprint… it’s more like a marathon. Companies change, evolve, and go through rough times, and then more than ever, Heather has been pivotal in providing the right motivation, tempo and focus to keep the reaction going.

Who says that an AI superstar can’t be a mom? 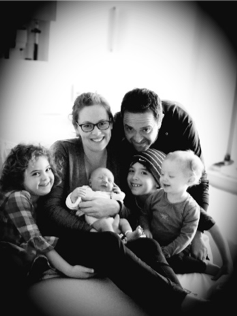 Having a family is orders of magnitude more challenging than running a startup. I mean… they should not even be discussed in the same article. But I will just because Heather is able to make the careers of COO of a high-growth startup, and mother, work in harmony.

There are certainly several ways in which the above is possible, but surprisingly very few that are ideal. You can go to one extreme and take only 1 week of maternity leave. Or you can hire other people to be surrogate parents and never see your kids.

But this is not what Heather wanted for our family. She wanted kids to be loved and cared for by us, not others. So the choice was to bring our kids with us in the office, beginning at Boston University, then in Neurala, until they were old enough for daycare or a nanny. This means that our four kids have racked up years of ‘work hours’ in Neurala already!... and our 4th, baby Leonardo, is just 3 months old.

(As I write this, they are all roaming around in the office… does not happen often though... or the company would catch fire!)

When I said ‘we’, Heather, as a mother, has the lion’s share. Understandably, mothers are hard to match and substitute. So she fronts the majority of the workload, which on top of being the co-founder of Neurala, adds one mountain on top of another.

That’s why this award for me is not just a ‘good job for running a company’. While Neurala is much more of its founders—and we have 45 amazing employees that are making this dream possible—being a co-founder and a mom of four children that see their mother working hard for them and the company every day is in a different league.