Your Robot Is Coming To Serve You 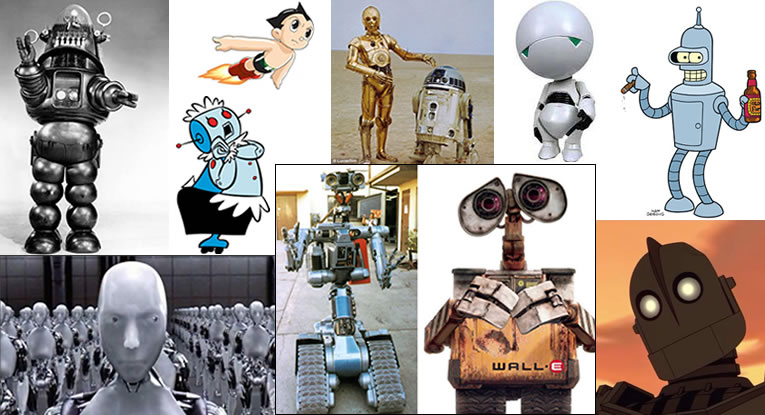 Visualize what your first personal or office service robot will look like. What do you imagine? Depending upon your age, you may think of Rosie Jetson, C-3PO or even Bender. (Greatest TV Robots of All Time.)

Your service robot is coming, but it won't look like any of the robots in the image above. Instead, it will probably look like an iPad on a stick or an iPhone in a tiny tractor.  (See DoubleRobotics and Romotive.)  Products that look like this will be on the market by the end of the year. And, they will be cheap. The Romotive product is just $150. (Romo store)

A major revolution is happening in the robotics market and it is driven by the smartphone. When you grab your phone to make a call, you may not think about the amazing array of sensors, processing power and memory in that device. Due to high volume smartphone manufacturing, components that cost hundreds or thousands of dollars just a few years ago are now just a few dollars or less. Look at the list in the graphic below: 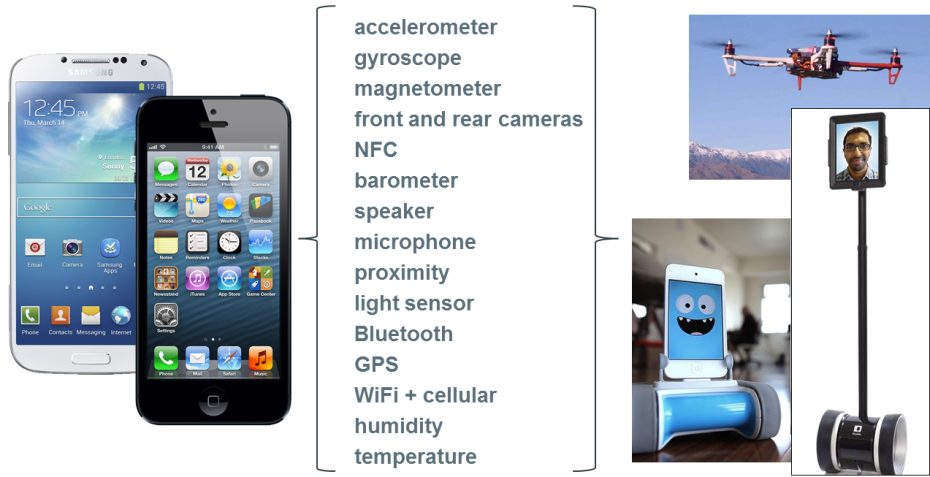 The amazing thing is that your smartphone contains enough technology to be the central nervous system for a robot.   Your smartphone can see, hear, feel and communicate. It has enough processing power to drive the wheels and, eventually, other appendages. Soon, they will fly.

I can think of dozens of uses for this technology. Some companies are betting this year on "telepresence." We all know about conference calls and we may have seen telepresence rooms.  With conference calls, we miss out because we cannot see facial expressions or what people are writing on a whiteboard.  Telepresence rooms allow visuals, but can cost $30,000 to $350,000 each.

For less than $2500, a company can own a telepresence robot that will allow traveling executives to go to and sit in on any meeting in any room complete with audio and video communications. This robot can also go to other places. It can check on manufacturing or tour the plant. A lower cost version could check on the babysitter or watch the kids at play.

While new low cost robot hardware makes telepresence possible, robotic software has not kept up with the change. Robots are usually manually driven much like the way a video game character is driven using a joy stick. This is a major usability problem for robot companies. The robot operator needs spend time driving and watching to avoid obstacles along the way.

A TechStars company, Neurala, is solving this problem by enabling robots to operate independently. Instead of using a joy stick, you will be able to tell the robot where to go ("go to the conference room") or who to find ("find my daughter").

Neurala accomplishes this by taking input from multiple ordinary sensors and making decisions about the information it gathers. It uses "parallel processing" to analyze more than one information source at a time -- similar to the human brain. Neurala software learns and adapts to its environment as well. It can build a floor plan and remember the people it sees. It can also spot changes. ("Who left a package here?")

This vision will happen sooner than you think. The hardware is already there and the software is not far behind. Then, the new age of personal robotics will become real. Your robot on a stick -- or in a tractor -- will be ready to serve you.