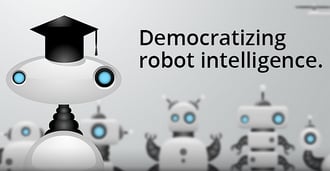 Where are all the robots? We see robots in factory assembling lines, cleaning our floors, and assisting in surgery. Cars and airplanes are also becoming more robotic.... When you go to a car dealer, the average sedan is loaded with a bunch of sensors that a few years ago could only be found in high-end robots. And the Federal Aviation Administration has a timeline to open the skies to unmanned aerial vehicles.

But why aren’t robots already everywhere? Because to operate safely and effectively among humans, they require similar intelligence than the one exhibited by humans or animals. I am not talking only about high-level reasoning, but simple skills like being able to navigate to a place in a home or factory without hitting a wall or running over your dog (let alone avoiding collision on a road or in the airspace!...), or recognize a person. These skills are easy for humans, or even dogs: my dog recognizes me, understand and obeys my commands, can even walk around and find its way home. Why can’t robots do that?

Neurala is taking a bold first step in making this dream come true.

This morning, Neurala unveiled the world’s first robot intelligence software designed for widespread commercial use. What better venue of the TechStars Demo Day event, taking place in the Boston House of Blues in front of hundreds of investors and the media?

Neurala is reinventing the way robots are used. Unlike previous commercial robot software, which relied on programming for repetitive tasks or operation by remote control, Neurala’s software enables robots to learn and adapt to their environment without human intervention. This is the outcome of years of hard work by a fantastic team of neuroscientists and software engineers.

How does it work? You do not program behaviors anymore. The software captures the two main ingredients of intelligence: learning and massively parallel processing. This allows robots to learn in real-time about their environment, and be taught as we would teach a human being to recognize places and faces. Like human beings (and animals of course…do not underestimate ANY brain!), robots with Neurala inside continuously learn about their world… they never stop getting better!

There are a number of powerful trends occurring in the world right now that are deeply affecting robotics: from ubiquitous smart devices, to 3d printing for rapid prototyping, to extremely cheap sensors. But as more and more companies build inexpensive, powerful robotic bodies, who is going to write the software that will allow them to learn and improve?

Neurala will be the brain for every robot.