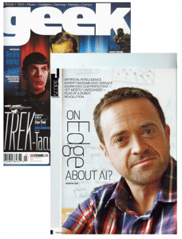 GEEK is an American print magazine launched in 2006. According to their description, GEEK is “a lifestyle magazine for geeks of every kind”.

Their February edition features a broad-band interview between me (Max, Neurala's CEO) and Matt Casey in topics ranging from robotics cutting edge technology, to robotics ethics,… to sci-fi movies. The article can be found here.

Not because I was interviewed.... but it's a good read! It touches on several moral issues that whoever works in Neurala has faced at a certain point. We all believe that this technology will be extremely useful to society, and thinking machines will multiply our reach and impact in the world, in a positive way.

As with every technology, there are dark sides, and misuses. But the point of being "exceptionally" afraid of artificial brains as inherently more evil than humans is, I believe, misplaced. Humans are, in a few instances, pretty evil, and we have all the reasons (and power) to build kinder robots than the average human. So, relax.