BOSTON—May 9, 2018— Neurala today announced a breakthrough update to its award-winning Lifelong Deep Neural Network (Lifelong-DNN) technology. The update allows for a significant reduction in training time compared to traditional DNN—20 seconds versus 15 hours—a reduction in overall data needs, and the ability for deep learning neural networks to learn without the risk of forgetting previous knowledge—with or without the cloud.

This follows the recent announcement by the Edison Universe that it was recognizing the new technology with its 2018 Gold Edison Award, as well as the Association for Unmanned Vehicle Systems International (AUVSI) naming the technology as the first place winner in their awards program’s technology innovation inspection category.

“It takes a very long time to train a traditional DNN on a dataset, and, once that happens, it must be completely re-trained if even a single piece of new information is added. Our technology allows for a massive reduction in the time it takes to train a neural network and all but eliminates the time it takes to add new information,” said Anatoli Gorchet, CTO and co-founder of Neurala. “Our Lifelong-DNN is the only AI solution that allows for incremental learning and is the breakthrough that companies across many industries have needed to make deep learning useful for their customers.”

Deep learning before and after Lifelong-DNN

Off-the-shelf DNN is pretrained on an ImageNet—a massive database of images organized by keywords—and specific datasets. Until now, traditional DNN was fixed, and, to add new data, the system needed to be retrained on all objects from both datasets.

This traditional method required using powerful servers often located in the cloud. Neurala Lifelong Deep Neural Networks, Lifelong-DNN, enable the learning of objects on the edge incrementally, mimicking in software the way cortical and subcortical circuits in human and animal brains work “in tandem” to add new information on the fly. Lifelong-DNN can use 20 percent of the number of instances per class, with only a single presentation of each during training to achieve optimal performance. This can decrease training time even more.

“This update is game-changing for edge analytics and for the way servers are used today,” added Gorchet. “We can envision this technology slashing compute powers in server farms and enabling networks to be assembled on the fly on custom data. We are only scratching the surface of potential applications.”

Neurala’s neural network software uses a bio-inspired approach to mimic the way the human brain learns and analyzes its environment. This software enables a variety of smart products—from industrial drones to consumer electronics and cameras—to learn, adapt and interact in real time. For example, security cameras can identify specific threats, and drones can “learn” how to diagnose problems at the tops of cell towers—saving humans considerable danger and drudgery. 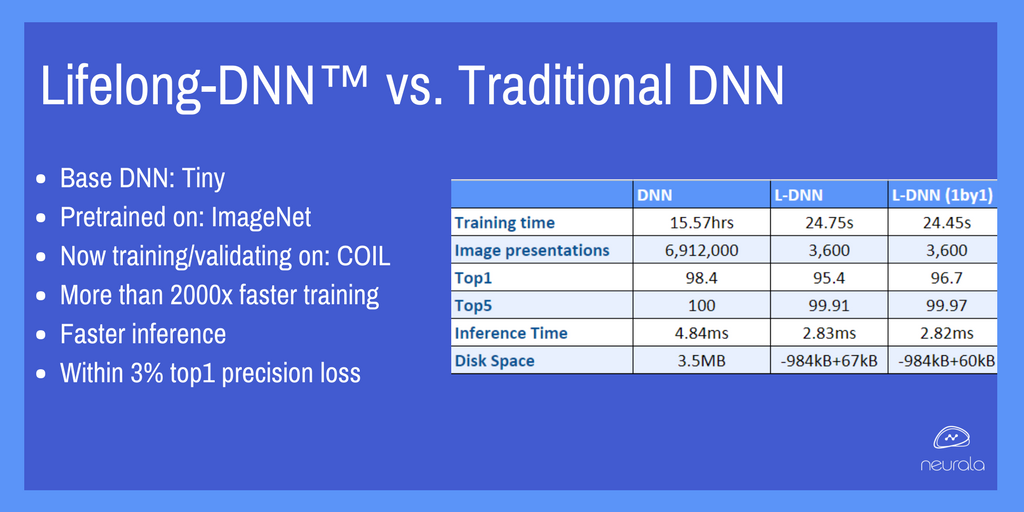 Neurala, Inc. developed The Neurala Brain—deep learning neural network software that makes devices and products like drones, mobile phones and cameras more intelligent, engaging and useful. Neurala provides customized solutions ranging from high-end applications to inexpensive everyday consumer products. With The Neurala Brain and an ordinary camera, products can learn people and objects, recognize them in a video stream, find them in the video, and track them as they move. The Neurala Brain is based on technology originally developed for NASA and the U.S. Air Force. Follow Neurala on Twitter @Neurala and on Facebook, YouTube and LinkedIn.